September 16, 2019
The term ‘anorexia nervosa (AN)’ is, in itself, misleading and generally considered a misnomer.

1) ‘Anorexia’ implies that the individual has lost all interest in food, never hungry and has no appetite. Yet, this is rarely the case. The opposite is more accurate of the AN experience.

The person is not only very interested in food and frequently very hungry, but as weight continues to decrease, and the person reaches low-weight stages AN, their preoccupation and obsession with food becomes overwhelming.

Nevertheless, the person experiencing AN will do everything in their power to deny and ignore these feelings and sensations and not permit themselves to eat. This is a particularly important characteristic AN, along with individual’s attempt to strictly control food and eating, with great time & effort.

The question of ‘what is AN?’ is difficult one to answer given particularly complex and multidimensional nature of the illness.

A large spectrum of physical, psychological, social, emotional, behavioural and cognitive features documented. Many of these have acknowledged and generally accepted as being defining features of AN.

However, it may be argued (I would certainly argue this) that the list of defining features is not complete. We must remember that AN is a complex illness with many consequences and implications. This is evidenced by the point that not all individuals experience exactly the same symptoms/implications in degree or severity.

We can paint a general picture of the AN experience but we must remember the the experience is very much an individual one.

Epidemiological studies suggest that approximately 85-90% of AN are female, about 10-15% are male. It is now widely accepted that AN is not restricted to young, white, girls and women from middle class backgrounds. AN (and all eating disorders for that matter) do not discriminate. AN can affect anyone of any gender, sex, age, background, religion, culture, ethnicity, nationality and occupation.

A number of signs & symptoms to look out for with AN include:

Individuals with AN often finds an outlet via their body: distress and pain are mirrored in their extreme control of body – not for beauty or vanity’s sake – but because they have no other way of coping with such distress.

The body becomes canvas for which such distressing emotional and psychological thoughts and feelings are represented.

As with all types of Eating Disorder, AN is a complex, multidimensional illness that has complications affecting all areas of life – physical, psychological, emotional, social, sexual, behavioural, occupational.

Evidence suggest that the sooner you seek and receive help and support (wherever that may be), the more effective treatment and therapy will be, and the more likely you will become well again. 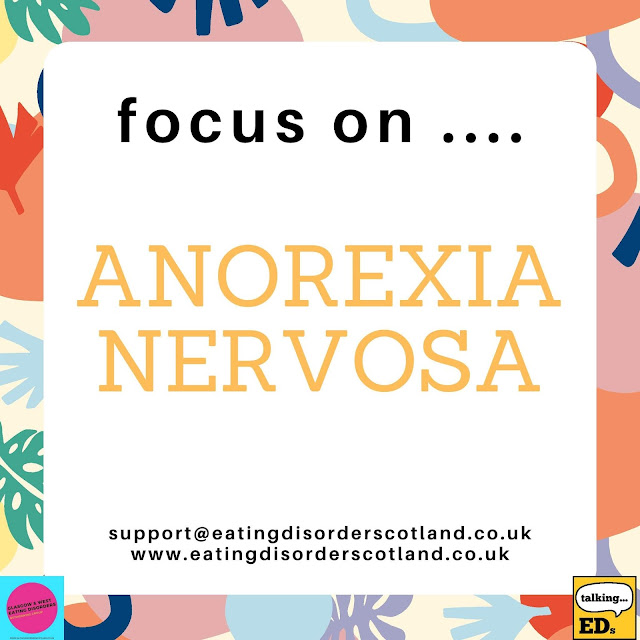 Popular posts from this blog


* Would you like the opportunity to work with adult and young people  experiencing eating disorders/disordered eating in private practice?

* Would you like us to refer clients onto you while we take care of room hire fees, referral fees and advertising/marketing, admin, referrals, setting up initial appointments and still earn £30-£40 (£40 for after 5pm/weekend, £30 for daytime) per appointment?

* Would you like to receive other benefits, such as discounted supervision, access to room hire discounts (when you hire the room for your own clients), discounted access to therapist peer support groups , free coffee and chat clubs for affiliates and more?

* Would you like add a few clients to your own private practice and see the clients we refer on around your other commitments (i.e. you choose wh…
Post a comment
Read more

VACANCY: We are looking for another affiliate therapist to join the team

April 20, 2020
This week's #MondayMotivation is #MondayMoodles.


Moodles are little creative exercises you can do to become aware of feelings, reduce stress or anxiety, help you relax or feel better and much more.

Some people have a wee bit more time on their hands at the moment (I wish I did!), so engaging in some creative activites for mental health can really improve wellbeing and stress at the moment.

I've provided 4 Moodles to try below.

Give one or more of these a go and see how you get on... it might even help you feel a wee bit better.

Take care and have a good day, Alexandra

'Write a break-up letter to your stress'

'Oh no! Here comes your evil stress monster. Moodle it some wings and watch it fly away'.

With everything that's going on with COVID-19 at the moment, it can be easy to slip into thinking about things we're not in control of at the moment, or the things that are not going right or perhaps focusing on feeling overwhe…
Post a comment
Read more

Scribblings of a Psychotherapist
I am an qualified Integrative Cognitive Behavioural Psychotherapist, Psychology Practitioner, Group Facilitator, Counselling Skills Trainer, Psychology Trainer, Writer and Researcher. I specialise in eating disorders, emotional and disordered eating. I also have an interest in working with identity, existential issues, emotional regulation, creative therapy and group dynamics. I am have an interest in therapeutic environment and language in therapy too.