October 28, 2019
#MondayMotivation
There is no 'right' time to change or take action. If we wait for that 'right' time we will never work on recovery, seek support, go to therapy or counselling or make the changes that we need to make in life.
NOW is the right time. Don't put of making your life a bit better any longer. Why wait? Give yourself permission and tell yourself that you deserve things to be better. Because you do. Every single person reading this deserves life to be better. And it can be. Just give yourself permission to spend some more time on you.
And, by the way, you CAN do it, even though your critical voice might be telling you otherwise at the moment. YOU CAN DO IT.
See the video link that follows on self-worth:
https://www.facebook.com/all4/videos/722720681479084/UzpfSTE4NjM0NDgyNDczMTc5NDE6MjM0MjEwNTUyMjc4NTU0Mg/
All the best, Alexandra :-)
www.glasgowanxietydepression.co.uk
support@glasgowanxietydepression.co.uk 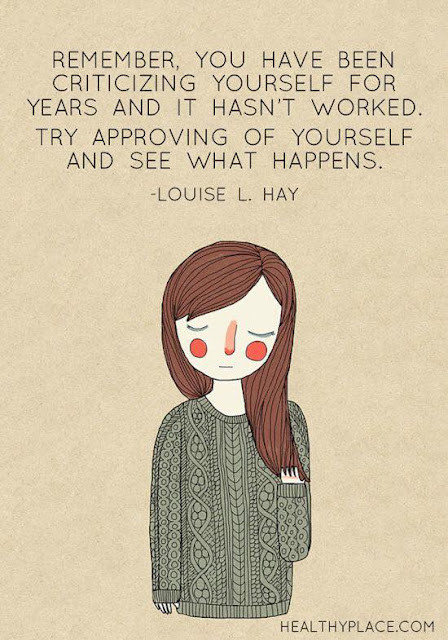 Popular posts from this blog

BODY IMAGE AND BODY DYSMORPHIC DISORDER: What is it?

May 14, 2019
BODY IMAGE AND BODY DYSMORPHIC DISORDER As we said yesterday, this week in Mental Health Awareness Week 2019. This is a national awareness week and the theme this year is Body Image. See Monday's post to see what we are doing this week. We will also be posting everyday this week on Facebook, Twitter and the blog about Body Image and BDD (Body Dysmorphic Disorder). Body Dysmorphic Disorder (BDD), or body dysmorphia, is a mental health condition related to Body Image where a person spends a lot of time worrying about flaws in their appearance. These flaws are often unnoticeable to others. People of any age can have BDD and it affects anyone of any gender or sex. Having BDD does not mean you are vain or self-obsessed. It can be very upsetting and have a big impact on your life. Low mood, anxiety, emotional dysregulation, stress, trauma, self-harm and eating disorders are some of the other conditions that can co-occur with BDD. Some of the symptoms of BDD include: * worrying a lot about a sp…
Post a Comment
Read more

VACANCY: We are looking for another affiliate therapist to join the team


The term ‘anorexia nervosa’ is itself misleading and generally considered a misnomer.
‘Anorexia’ implies the individual has lost all interest in food, never hungry and has no appetite. Yet, this is rarely the case. The opposite is more accurate of anorexia.

The person experiencing anorexia is not only very interested in food and frequently very hungry, but as weight continues to decrease and the person reaches low-weight stages AN, his/her preoccupation and obsession with food becomes overwhelming.

Nevertheless, the person will do everything in their power to deny and ignore these feelings & sensations & not permit him/herself to eat. This is a particularly important characteristic of AN, along with the individual’s attempt to strictly control food and eating, with great time & effort.
The question of ‘what is Anorexia Nervosa?’ is a difficult one to answer given particularly complex & multidimensional nature of the il…
Post a Comment
Read more

Scribblings of a Psychotherapist
I am an qualified Integrative Cognitive Behavioural Psychotherapist, Psychology Practitioner, Group Facilitator, Counselling Skills Trainer, Psychology Trainer, Writer and Researcher. I specialise in eating disorders, emotional and disordered eating. I also have an interest in working with identity, existential issues, emotional regulation, creative therapy and group dynamics. I am have an interest in therapeutic environment and language in therapy too.